Most of Richard's paintings have a strong sense of place, even the ones which were straight out of his imagination. One real place, however, stands out as his richest source of inspiration for his largest single body of work - Lepe beach.

Lepe beach is a short stretch of shingle and sand a few minutes drive from Richard's home in Dibden Purlieu. It stretches east towards the Southampton Water estuary and west to the mouth of the Beaulieu River. The beach itself provides endless material for a painter. Richard loved its textures, the stony spit at low tide and its idiosyncratic visitors. The beach also gives a grandstand view of the vast panorama of the Solent, the channel of open water extending twenty miles from the entrance to Portsmouth harbour, along the whole length of the Isle of Wight, past the spit at Hurst Castle and on to the Needles at the Island's western tip.

The constant procession of vessels also fascinated Richard - warships heading for the Portsmouth naval base, liners and freighters making their way to Southampton port and tankers going into the refinery at Fawley. Then there was the Isle of Wight ferry, countless small motor boats, grand yachts and, closer to the shore, the agile windsurfers. The Island itself is an ever present backdrop to all of this.

The beach faces south, so you look into the light most of the time which makes everything a little more dramatic. It also faces into the prevailing wind so you can see a storm heading straight for you ages before you feel the first raindrop.

Richard moved to the area in the mid 1930s, but he did not start to paint his experience of Lepe Beach regularly until the 1960s, and it was not until he was getting older in the 1980s that that he really became obsessed, painting it right up until his death in 1992.

This set collects together pictures of the beach iteself, views across the Solent from the beach and paintings which document life on the beach or which have been inspired by it. 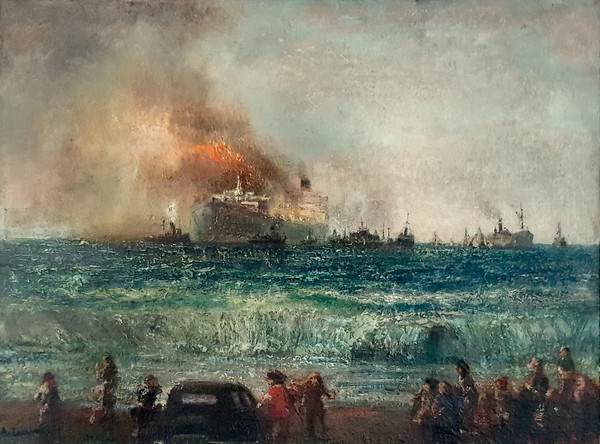 An unusually dramatic event reminiscent of scenes Dad dealt with during the War. There is a feeling of greater freedom though here where he is expressing the excitement rather than documenting for historical reasons. 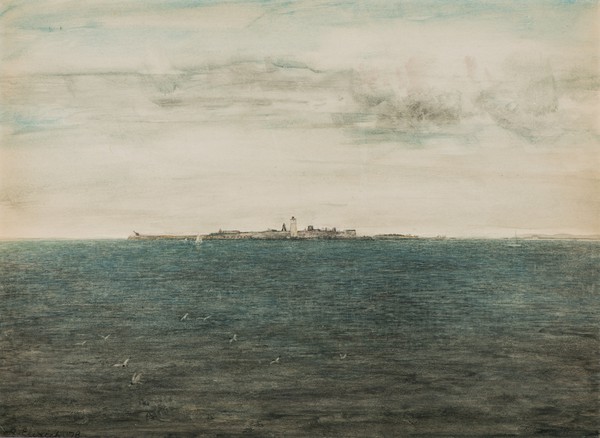 I thought I would include an ‘empty’ picture. I think it is masterful how the distance across the water to Hurst Castle is suggested in such subtle ways. 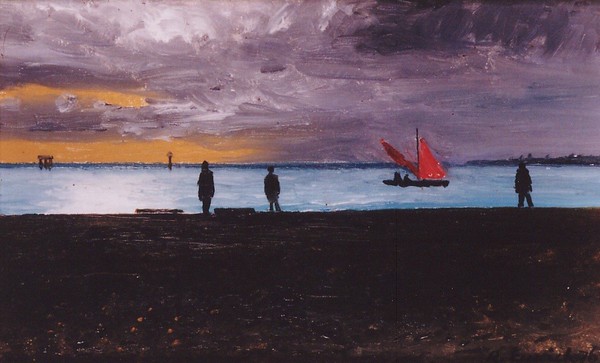 This scene shows how much Dad could enjoy and be confident with strong colour after many years being rather circumspect. 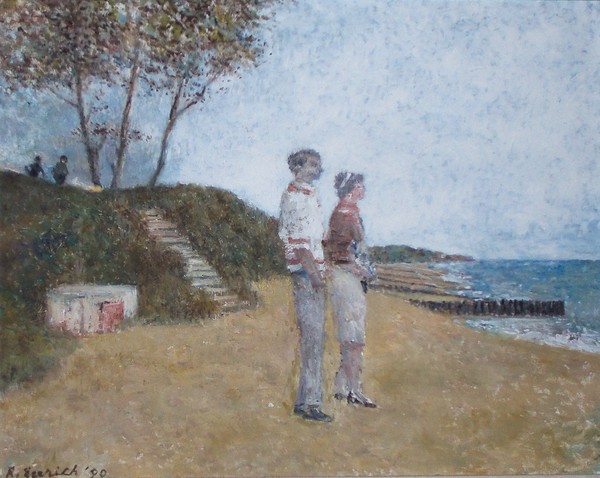 There’s a lovely formality about the arrangement of the details which make up the composition of this picture. The weirdly tall figures feel just right and Dad is not worrying about accuracy here! 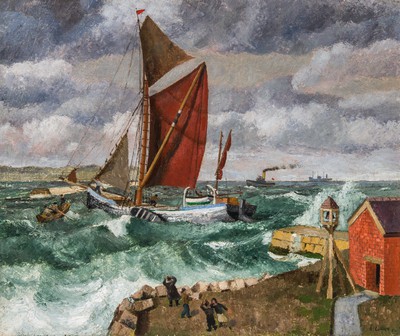 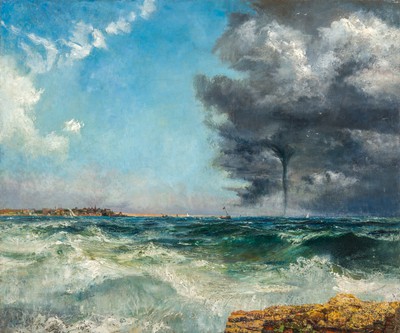 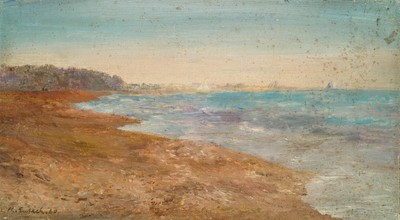 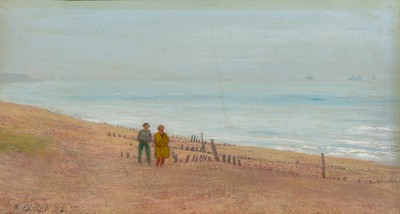 Oil on thin board 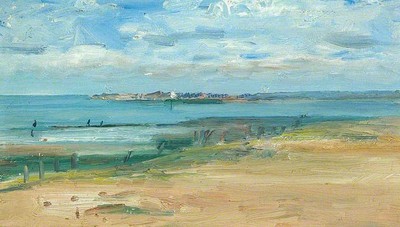 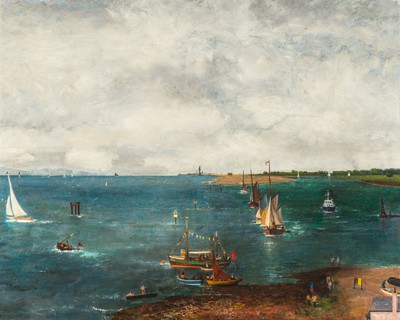 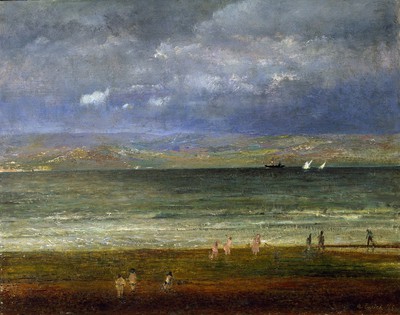 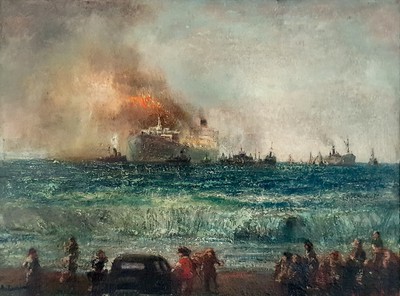 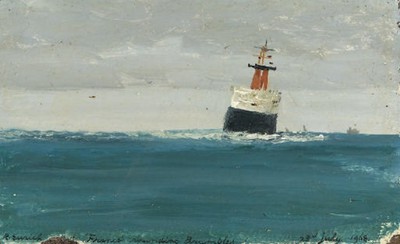 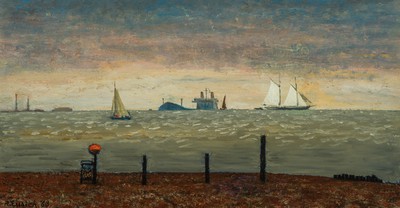 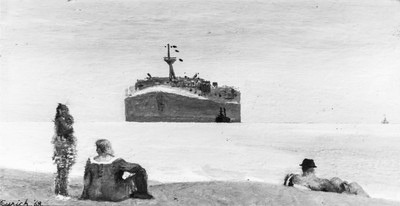 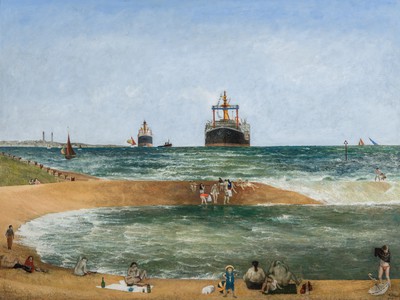 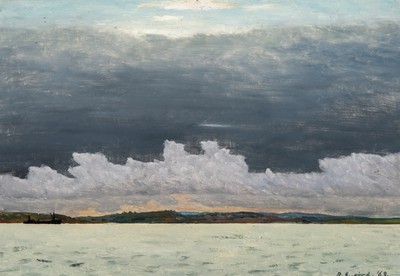 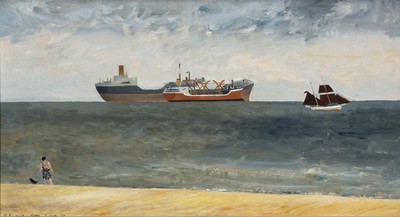 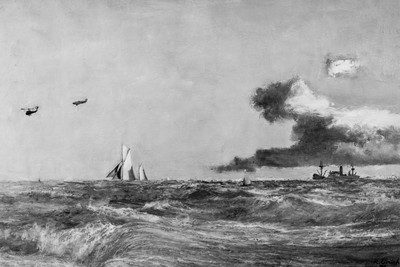